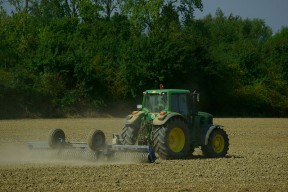 As he got to the end of the field, he readied himself as he turned to plow down the next row.  The rotary hoe attached to his tractor sliced several lines into the dirt and lifted up the weeds beginning to grow in between the rows of soybeans.  The hot wind blew in his face like a furnace.  The farm-hand took 3 deep breaths and made a 180 degree turn.  This time as the rotary hoe plowed up the dry earth behind him, the steady wind pushed a thick cloud of dust around him, surrounding him on every side.  It was hard to breathe. He covered his mouth and nose and continued to forge through to the end of the row, trying not to breathe in too deeply.  At the end of this row, he turned his wheels another 180 degrees and now was met again with a blast of hot wind.  The dust was blowing behind him once again. He could breathe in deeply…until he got to the end of the next row.

My husband has had dozens of dusty experiences in his life.  He grew up on a wheat farm in the midwest.  Working for his dad all throughout high school, he remembers being “caked with dust” often as he worked out in the fields.  Cleaning grain bins, gathering hay bales, harvesting wheat and soybeans…all were very dusty activities at times.

In 2002, he was stationed in the desert of Kuwait at Camp Doha with the army during Operation Iraqi Freedom.  The dust was so fine it hung in the air like a thick blanket.  He said he got used to it and it almost wasn’t noticeable, but the air all around had a tan-colored tinge most all of the time.

Dust is everywhere.  Outside.  Inside.  It seems to be an ever-present part of life.  Some locations are dustier than others but all places need some dusting.  I’m always amazed how quickly it accumulates.  Dust is everywhere.

Dust was the material God used to form man originally.

Genesis 2:7 says, “Then the Lord God formed a man from the dust of the ground and breathed into his nostrils the breath of life, and the man became a living being.”

Our Loving Creator knows that we are fragile, easily broken and weak at times.

If this encouraged you, feel free to share with others.

20 thoughts on “Have You Dusted Today?”